Best Times contains a rich set of features for the Trials mode, which main purpose is to record the time of every individual player and store these in a database which will sort those times out and showoff the best time for every trials map to anyone who's interested!

BTimes provides a set of new submodes which define new trial rules of which are applied to the actual underyling gametype. These submodes are Regular Trials, Solo Trials and Group Trials.

In this submode(RTR) of set rules, players must work together to complete the map, each player can complete a objective on his own(if map supported) or with a team, they have to complete the map under the timelimit to win. This is also known as Classic Trials from way back in 2004 to 2009. Regular Trials have their own set of maps designed according to this set of rules! Prefixed by RTR-MAPNAME.

In this submode(STR) of set rules, players are completely on their own, each player can complete the map on their own without any dependence. A player is allowed to complete the map infinitely, the only way to win is to beat the #1 BestTime on that map. This can be seen as Bunny Track from the classic Unreal Tournament aka UT99. Solo Trials have their own set of maps designed according to this set of rules! Prefixed by STR-MAPNAME.

In this submode(GTR) of set rules, players must setup a group whom they wish to partner with, a group must be maximized before they are allowed to participate in a map. Grouped players must work together to complete the map, where they will have to synchronise jumping, landing and enter areas etc, the group players will have to reach the end of the map, timing nearly everything in synchronise, if one player of the group dies then the whole group gets respawned to beginning of the map and will have to try everything over again! Once one group reaches the end they then can retry the map until they have beaten the #1 BestTime on that map as a group! Group Trials have their own set of maps designed according to this set of rules! Prefixed by GTR-MAPNAME.
$teaser 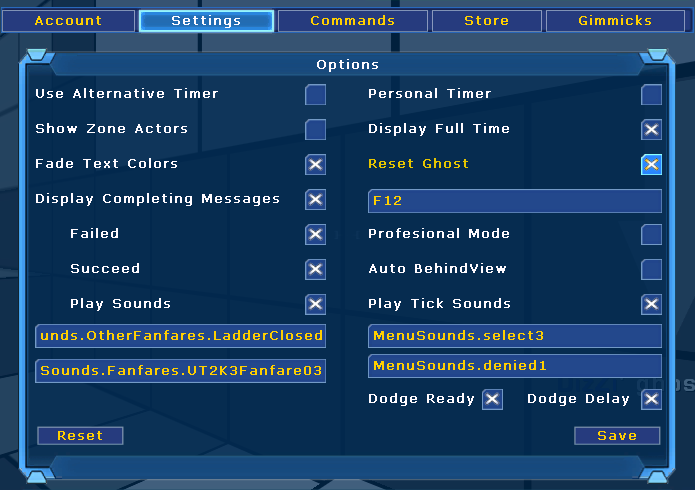